In December 2020, NeoTreks partnered with The Town of Castle Rock and Santa to track his visits to the town leading up to Christmas. But, how did this magical event take place? Let’s pull back the curtain and see how NeoTreks set up the technology to track Santa.

In December, NeoTreks partnered with The Town of Castle Rock to provide technology in maintenance vehicles to enhance efficiency and safety. This software, known as PlowOps, has provided a location-based tool to increase efficiency, enhance safety, and connect the community.

However, creating a Santa tracker is a whole different Christmas tree. When the team at NeoTreks agreed to donate their time, effort, and energy for this event, they knew they were headed into uncharted territory. And for a location-based software company, charting new territory is exactly what they do.

NeoTreks built a custom Christmas Themed map based on their Accuterra maps and designed the date-specific color coding, and tracking themes in collaboration with the Castle Rock GIS department. A mount and tablet were borrowed from Castle Rock Streets department, the device was configured to be in “Santa Tracker” mode and was installed in the Fire Truck.

Once the customizations were implemented, the stage was set for Santa’s visits to the town. Logistically, Santa was going to ride on one of the town’s fire trucks, while being escorted by police cars. The tablet has LTE cellular connection that allows the PlowOps software to track Santa’s location.

Once Santa began broadcasting his signal from the tablet in the truck, the citizens of the town would be able to track Santa on the PlowOps public-facing website. This process would provide transparency into Santa’s location to ensure all the boys and girls of the town could be prepared for him. However, this is when one of the first challenges began.

PlowOps was designed to facilitate the tracking and management of plow trucks by supervisory staff. This is typically one or two computers per town. It was not designed to accommodate the thousands of concurrent users that jumped on in anticipation of Santa’s arrival.  NeoTreks acted quickly and a new, more efficient, and scalable solution was created within a matter of hours on a Saturday that was able to accommodate the thousands of users that were trying to access the site.

With these challenges solved by the creative team at NeoTreks, a clear pathway was set for the rest of Santa’s visits. By 2:00 pm on the first day, all of the tracking tools were operating effectively, and all went smoothly for the other four days of Santa’s trip. NeoTreks had adapted and overcame the challenges presented to them. Consequently, the citizens of the town were blown away by the tracking tool, and Santa’s visit was a tremendous success. Most importantly, the kids of the Town of Castle Rock experienced the magic and joy of Christmas in a year that has been so challenging.

Get the full case study here! 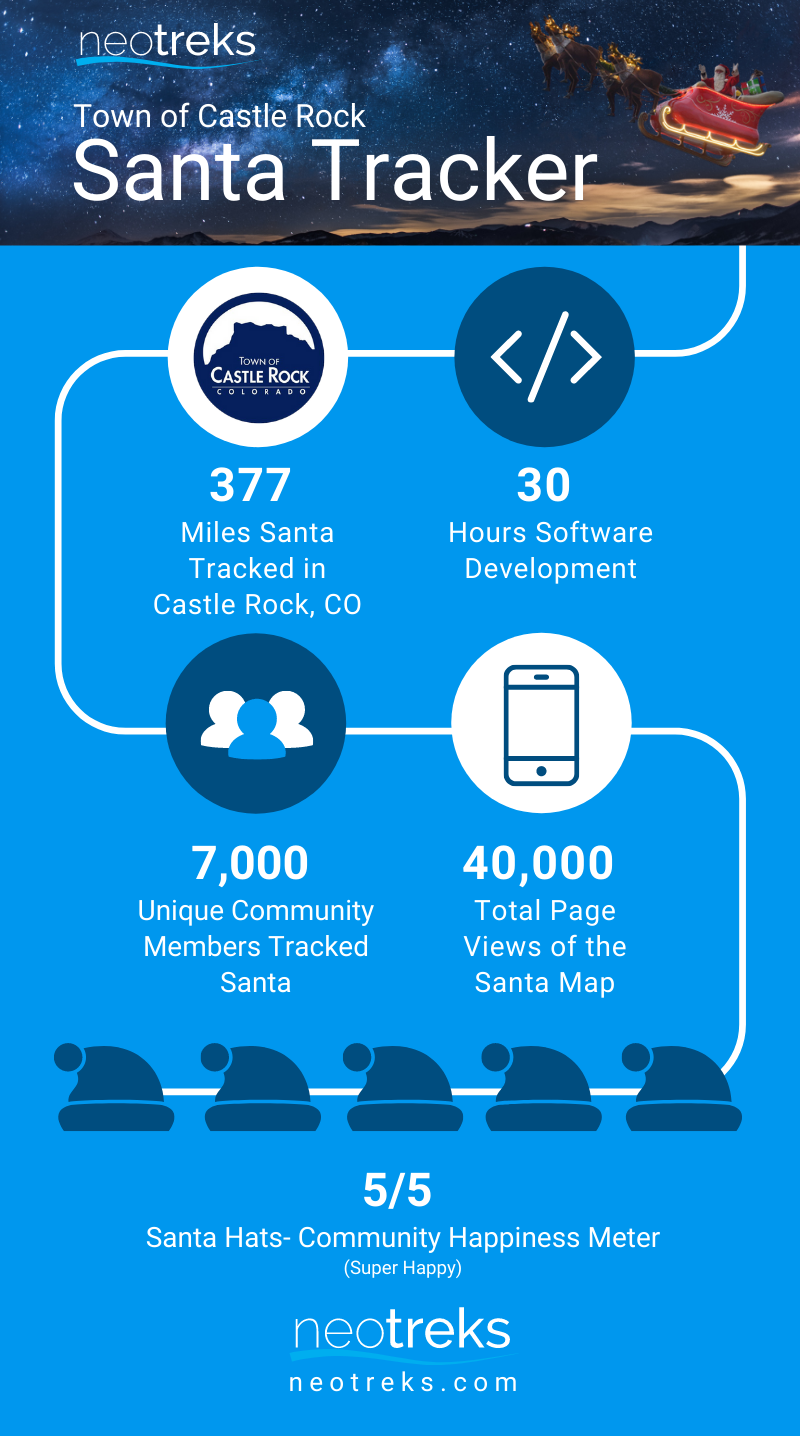